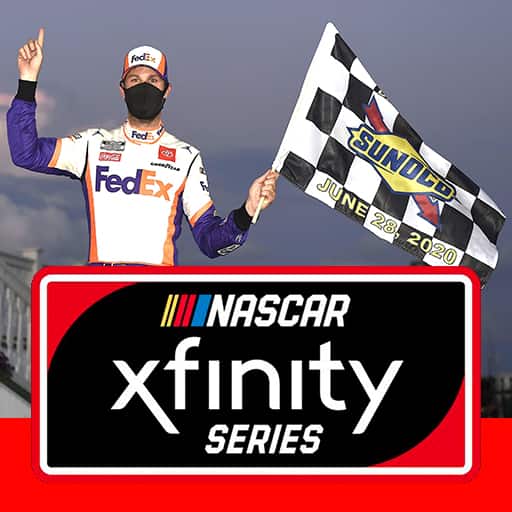 The NASCAR Xfinity Series is the second-highest level of professional competition in NASCAR. The most recent series champion is Austin Cindric in 2020.

The modern incarnation of this series began in 1982, with sponsorship by Anheuser-Busch Brewing’s Budweiser brand. In 1984 it was renamed to the Busch Grand National Series, then later just the Busch Series. The Anheuser-Busch sponsorship expired at the end of 2007, being replaced by Nationwide Insurance from 2008 to 2014, and the series is now sponsored by Comcast through its Xfinity brand.

The Nationwide (now Xfinity) Series at Road America in 2011, using the Car of Tomorrow design.
The season usually has fewer races than the Cup Series, and the prize money is significantly lower. However, over the last several years, a number of Cup Series drivers have run both the Xfinity and Cup Series events each weekend, using the Xfinity race as a warm-up to the Cup event at the same facility. Furthermore, several drivers not only participated in both Cup and Busch/Nationwide/Xfinity events on the same weekend but also began to compete in both series on a full-time basis. Kevin Harvick was the first Cup Series driver to compete full-time in the Busch Series and win a title, actually doing so twice; in 2001, he did this for Richard Childress Racing but only did so out of necessity as Dale Earnhardt’s death forced him into the Cup series ahead of RCR’s intended schedule for him. His win in 2006, where he raced three separate cars for RCR and his own race team, was the first of five consecutive titles in NBS/NNS that were won by Cup series regulars.

The practice received criticism because it was thought to give the Cup Series teams an unfair advantage and that the presence of the Cup Series drivers squeezes out Nationwide Series competitors who would otherwise be able to qualify. These dual-series drivers have been labeled “Buschwhacker“, a play on words that combines the original series sponsor’s name with the notion of being bushwhacked. In May 2007, NNS director Joe Balash confirmed that NASCAR was exploring options to deal with the Bushwhacker controversy. One of the most often-cited proposals was for Cup Series drivers participating in the Nationwide Series to receive no points for their participation in a Nationwide race. In 2007, NASCAR chairman Brian France indicated that all options, except an outright ban of Cup competitors, were still being considered. On January 11, 2011, NASCAR.com reported that beginning with the 2011 season, drivers would be allowed to compete for the championship in only one of NASCAR’s three national series in a given season, although they could continue to run in multiple series. This change was officially confirmed by France in a press conference less than two weeks later and has remained in the NASCAR rules ever since.

Even with restrictions limiting points earnings to one national series, Cup drivers were still running and winning a vast majority of Xfinity series races through 2015. Starting with the 2015 season finale, NASCAR began to add additional restrictions in regards to Cup drivers running Xfinity races. Starting in 2019, Cup drivers with more than 5 years of experience in the Cup series will be limited to 7 Xfinity races per season. Further, Cup playoff qualifiers from the previous season are not allowed to compete in some Xfinity races and there will be restrictions on owner point earning by Cup drivers. Wikipedia