Check out the schedule for all current and upcoming NASCAR Cup Series this season.
The NASCAR Cup Series (NCS) is the sport’s highest level of professional competition. Get 100% guaranteed NASCAR tickets for all upcoming Nascar events in North America at the lowest possible price. 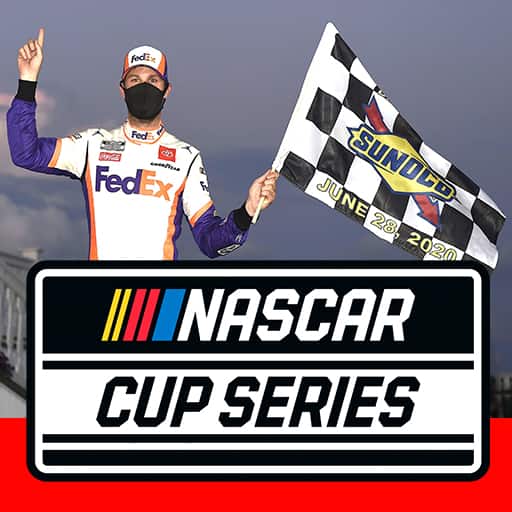 The NASCAR Cup Series (NCS) is the sport’s highest level of professional competition. It is consequently the most popular and most profitable NASCAR series. Since 2001, the Cup Series season has consisted of 36 races over 10 months. Writers and fans often use “Cup” to refer to the NCS and the ambiguous use of “NASCAR” as a synonym for the series is common. The 2020 NCS Champion is Chase Elliott. The record for most championships is 7, held by three drivers: Richard Petty, Dale Earnhardt, and Jimmie Johnson. Johnson has the record for most consecutive with five consecutive Cup Series drivers’ championships from 2006 to 2010. Previously, the most consecutive championships had been three in a row by Cale Yarborough in the late 1970s, the only other time when a driver has won three or more NASCAR Cup Series championships in a row.

The Cup Series had its first title sponsor in 1972. R. J. Reynolds Tobacco Company, which had been banned from television advertising, found a popular and demographically suitable consumer base in NASCAR fans and engaged NASCAR as a promotional outlet. As a result of that sponsorship, the Grand National Series became known as the Winston Cup Series starting in 1971, with a new points system and some significant cash benefits to compete for championship points. In 1972, the season was shortened from 48 races (including two on dirt tracks) to 31. 1972 is often acknowledged as the beginning of NASCAR’s “modern era”. The next competitive level, called Late Model Sportsman, gained the “Grand National” title passed down from the top division and soon found a sponsor in Busch Beer.

In 2004, Nextel Communications took over sponsorship of the premier series and formally renamed it the Nextel Cup Series. A new championship points system, the “Chase for the Nextel Cup,” (renamed “Chase for the Sprint Cup” in 2008) was also developed, which reset the point standings with ten races to go, making only drivers in the top ten or within 400 points of the leader eligible to win the championship. In 2007, NASCAR announced it was expanding “The Chase” from ten to twelve drivers, eliminating the 400-point cutoff, and giving a ten-point bonus to the top twelve drivers for each of the races they have won out of the first 26. Wins throughout the season would also be awarded five more points than in previous seasons. In 2008, the premier series title name became the Sprint Cup Series, as part of the merger between Nextel and Sprint.

In 2011, NASCAR announced a number of major rules changes, the most significant being abandoning the points system. The winner of a race now receives 43 points, with one-point decrements for each subsequent position (42 for the second, 41 for the third, and so on). The winner also receives 3 bonus points, and single bonus points are awarded to all drivers who lead a lap, plus the driver who leads the most laps. Another significant change involves the qualifying process for Chase. The number of qualifying drivers will remain at 12, but only the top 10 will qualify solely on regular-season points. The remaining two Chase drivers will be the two drivers in the next 10 of the point standings (11th through 20th) with the most race wins in the regular season.

In 2014, NASCAR announced another revamp to the Chase format, expanding the Chase pool to 16 drivers, and eliminating four drivers after every three races, leaving four drivers to compete for the championship at the season finale at Homestead. In addition, wins were given an increased emphasis, with the 16 drivers with the most wins (15 if the points leader is winless; points leader will receive an automatic berth) gaining a spot in the chase. If there are fewer than 16 winners, the remaining spots will be filled based on the conventional points system.

After the 2019 season, NASCAR declined an offer from Monster Energy to remain the title sponsor of the top series. On December 5, NASCAR revealed its new sponsorship model. Instead of a singular title sponsor, four “premier partners” (Coca-Cola, Xfinity, Busch Beer, and GEICO) would be closely affiliated with the top series, which was simply renamed the NASCAR Cup Series. Wikipedia